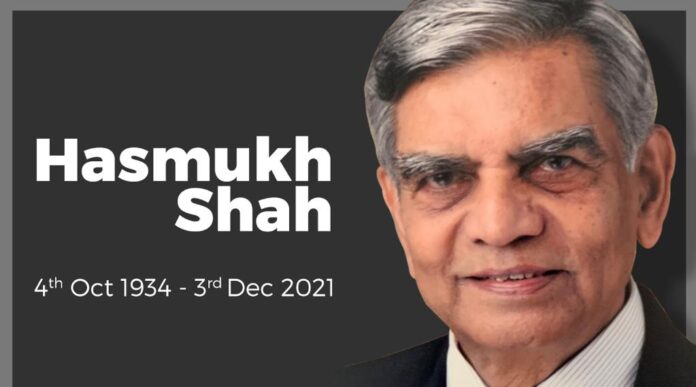 He had an unusual and remarkable life and career in government, public life, and as a private citizen.

He worked with three Prime Ministers – Morarji Desai, Charan Singh, and Indira Gandhi and he also served as Chairman & Managing Director of Indian Petrochemicals Corporation Limited (IPCL), a public sector enterprise. During his tenure, he convinced the legendary Jack Welch of General Electric (GE) to form a joint venture with IPCL to develop Engineering Plastics in India.

He was one of the pioneers in promoting the use of plastics and finding new applications in packaging, textiles, agriculture water management, and many other sectors in India. During his leadership, IPCL was awarded as the Best Petrochemicals Company globally by Chemical Insight magazine of UK. After retirement, Hasmukh Shah focused his time and efforts on establishing various foundations and organizations. He was the founder and/or head of Gujarat Ecology Commission (GEC), Gujarat Institute of Desert Ecology (GUIDE), Gujarat Ecology Society (GES), Gujarat Nature Conservation Society (GNCS), and Heritage Trust among others.

As a founding trustee of Darshak Itihaas Nidhi (DIN), he organized several international conferences on the Maritime History of Gujarat, along with fostering scholarship and arranging the publication of books on the subject.
He was also associated with INTACH since its inception. Hasmukh Shah was deeply involved with institutions of higher learning, notably the National Institute of Design (NID), Indian Institute of Technology (IIT), Institute of Rural Management (IRMA), Dhirubhai Ambani Institute of Information and Communications Technology (DAIICT), MS University of Baroda, Surendranagar Education Society, Center for Fuel Research, Central Pollution Control Board, Gujarat Industrial and Development Agency (GIRDA) and Lok Bharti.

He has been the trustee or chairman of several Development Organizations, NGOs, and Foundations such as Bharat Agro Industries Foundation (BAIF), Akshar Trust, Bharat Grameen Income Foundation, Charutar Arogya Mandal (Rural Healthcare), and Shram Mandir (Leprosy Eradication). In this extraordinary journey, Hasmukh Shah had personally experienced several historical events like the 1978 Jorhat Air Crash of the Prime Minister’s aircraft, the bombing of the CHOGM summit at Sydney, and the protests at Tiananmen Square in Beijing.

His book in Gujarati, “Dithu Mai..” has detailed accounts of many such experiences. An English Edition of this book titled “From the Margins of History” will shortly be published.

He leaves behind his wife Nila, son Amlan and daughter Alpana.