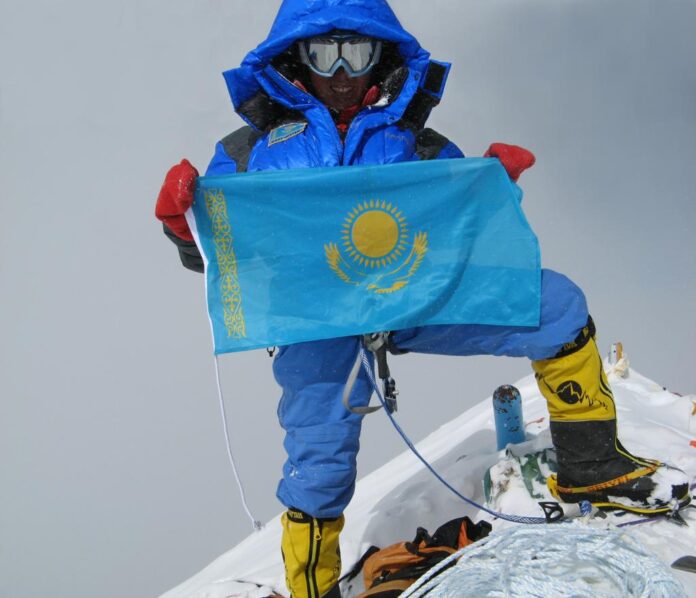 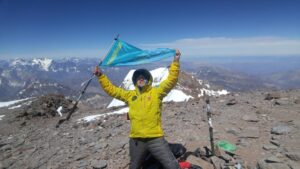 It was once said that before one sets out to discover the whole world, they should get to know their own homeland first. Following this salient advice is what gave the legendary Kazakhstani climber, Maksut Zhumaev the ability to conquer all of the 14 highest peaks in the world, including the mighty mount Everest, within a period of 10 years and 10 days.

Maksut Zhumaev’s unwavering devotion and perseverance towards the sport of mountain climbing is only matched his love for his country – Kazakhstan. Under his leadership, Kazakhstan became the first team in the world to traverse 14 highest mountains in the world and reach their peaks without the loss of personnel and without the use of additional oxygen or Sherpas, the high-altitude carrier guides.

Zhumaev understands the inherent danger in his profession and doesn’t shy away from it. The key to succeeding in this field according to Zhumaev is discipline and diligence. He said, “There, at a height beyond human capabilities, we become who we really are. Even the most resilient organism begins to fail at an altitude of five thousand meters. This process can be accompanied by panic attacks, disorientation in space, and a sharp increase in blood pressure. Therefore, all climbers and mountain hikers are advised to have mandatory regular training.”

Thus, with that history is mind, it’s only fitting that one of the largest mountaineering global initiatives in Kazakhstan belongs to Maksut Zhumaev. On December 16, 2021, in honour of Kazakhstan’s 30th State Anniversary, the National Team of Mountaineers, led by Zhumaev will carry out “30 peaks of the world of the 30th anniversary of the Independence of Kazakhstan.”

This initiative will show the Kazakhstani mountain climbing at the highest level of training and will set a new benchmark for mountaineers not just in Kazakhstan, but all around the world.

Zhumaev’s love for mountain climbing began in his early childhood. He grew up in Western Kazakhstan, in a village near Uralsk where there are many steppe expanses but no mountains reaching towards the sky. One of Zhumaev’s most vivid memories from his childhood was the vast and endless view of the steppe below from the Svistun Mountain.

As he and his father were returning from their trip on their way to get ice cream, the breath-taking panorama of his native steppe opened up to him. The way the unattainable horizon rounded off in the distance and went somewhere unknown truly opened up Zhumaev’s imagination to the countless possibilities mountaineering presented. These childhood emotions and memories are what Zhumaev holds in his heart every time he conquers another peak.

Today he is a multiple time champion of Kazakhstan as well as the open champion of the CIS in mountaineering in high-altitude class. He honoured with becoming the 27th member of Quest-14, the Master of Sports in Mountaineering of the Republic of Kazakhstan, the Master of Sports of international class, the holder of the Kurmet Order and the 12th climber in the world to conquer the 14 world’s highest peaks of 8,000 metres in height.

In 2000, after the first eight-thousander of Shishbanma, Maksut Zhumaev was added to the national team of Kazakhstan. This is the only instance in the history of mountaineering when a third-grade climber, who has no experience in climbing six-seven-thousanders, immediately climbed an eight-thousander and that too without oxygen.

His first stumbling block came in the form of the Chogori (8614m) as it was known then. Known as K-2 or the “Killer Mountain” today, this peak proved to be particularly difficult for Zhumaev who attempted to climb the mountain five times unsuccessfully. Fortunately for the tenacious Zhumaev, failure wasn’t a deterrent, rather it was a source of inspiration. On August 23, 2011, Zhumaev and his partner and friend, Vasily Pivtsov along with Gerlinda Kaltenbrunner (Austria) and Dariusz Zaluski (Poland) conquered the peak.

“I am glad that we were able to continue what was once begun by older climbers. Continuity is the most important attribute for a team,” said Zhumaev to commemorate his triumph over the might K-

Since time immemorial, mountains have attracted hundreds of adventure seekers and tourists from all over the world in the mountains of Kazakhstan. The one immutable truth that most of them don’t realise is that only those that show the mountains respect will have the favour returned.

Zhumaev understands this and believes that mountains have a soul and their own language. “I have always believed that mountains have a certain inner philosophy. In the mountains between you and the sky there is only air and nothing else. You can concentrate and feel what we all live for,” said Zhumaev when speaking about the key to his success.

The Kazakhstani peaks cover only ten percent of the country’s terrain but whole lifetime wouldn’t be enough to visit every single one of these ranges and peaks. Both amateurs and professionals try to traverse these peaks every year. They come carrying the insatiable desire to win a challenge against the Tien Shan mountains or the ridges of the Karkaralinsky mountains. Visitors today can travel to any of these heights accompanied by a professional mountain guide with a lot of experience in climbing routes of the highest level of difficulty – Maksut Zhumaev.

For the past several decades, Maksut Zhumaev has been engaged in coaching and education. He has worked towards popularizing mountaineering among the youth of Kazakhstan, instructing and accompanying local and foreign tourists in their ascents to the peaks of Kazakhstan and other heights of Eurasia.

Kazakhstani climbers were once seen in the same vein as astronauts, conquering places that normal people could only dream of getting a glimpse of. Today, one of the greatest climbers in the world is working towards to ensure that mountaineering continues to be alive and well for generations come. Zhumaev wants the quality of mountaineering in Kazakhstan and tourism in Kazakhstan to reach its full inexhaustible potential and reach far beyond the borders of the country.

“One ancient proverb says – the sun always shines, even if you don’t see it. Those who are strong in spirit and are able to not depend on the circumstances conquer the most inaccessible mountain heights. The main thing is to believe in your own strength. And you will see how high you can climb,” said Zhumaev.

“The Kazakh mountains are an excellent springboard for overcoming any fears. Maybe that’s why they are so attractive to tourists from all over the world? They are loved, sought after and always come back to set their own new record. And Kazakhstan, as a hospitable host, is ready to receive its guests again and again.”

The adventure isn’t over for Zhumaev, and it doesn’t look it’s going to be anytime soon. He has plans to climb Vincent Peak (Antarctica) and Kostsyushko Peak (Australia), as well as ski to the North and South Poles thereby closing the Total summit program and become the second person on the planet after Reinhold Messner to achieve this feat.

From being the youngest and most inexperienced of the three Kazakhstanis in the national team going for the first time on a trip outside his homeland to being a Kazakhstani hero showing not just the citizens of his country but the entire world what Kazakhstan is capable of, Zhumaev has lived quite the life. It is a great honour for the people of Kazakhstan and fans of mountaineering to see Maksut Zhumaev be the one to lead the “30 peaks of the world for the 30th anniversary of Kazakhstan”. As long as Zhumaev is climbing, the Kazakhstan flag will continue to fly high.